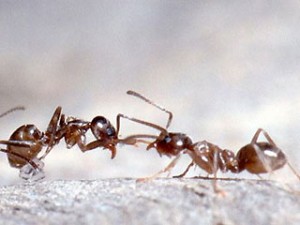 The Argentine ant (Linepithema humile, formerly Iridomyrmex humilis) is a dark ant native to northern Argentina, Uruguay, Paraguay, and southern Brazil. It is an invasive species that has been established in many Mediterranean climate areas, inadvertently introduced by humans to many places, including South Africa, New Zealand, Japan, Easter Island, Australia, Hawaii, Europe, and the United States. These ants can easily squeeze through cracks and holes no more than 1 mm (0.039 in) in size. Queens are two to four times the length of workers. These ants will set up quarters in the ground, in cracks in concrete walls, in spaces between boards and timbers, even among belongings in human dwellings.

In natural areas, they generally nest shallowly in loose leaf litter or beneath small stones, due to their poor ability to dig deeper nests. However, if a deeper nesting ant species abandons their nest, Argentine ant colonies will readily take over the space. Argentine ants are a common household pest, often entering structures in search of food or water (particularly during dry or hot weather), or to escape flooded nests during periods of heavy rainfall. Argentine ant colonies almost invariably have many reproductive queens, as many as eight for every 1,000 workers, so eliminating a single queen does not stop the colony’s ability to breed. When they invade a kitchen, it is not uncommon to see two or three queens foraging along with the workers.

Acrobat ants are small to medium sized ants, generally 2.6 to 3.2 mm long. They have very shiny bodies that are variable in color,  from light red to brown or black. An acrobat ant’s most distinguishing characteristic is its heart-shaped gaster that is held up over its thorax when disturbed. Acrobat ants may nest both outdoors and indoors. Outdoor nests are most often in dead and decaying wood such as logs, stumps, dead trees limbs, firewood and hollow tree cavities. They may nest in damp soil beneath leaf litter or rocks.

The small worker ants readily enter buildings through cracks around windows and doors and other openings. Trails of workers may be seen moving between the nest and a food source. Acrobat ants feed on a variety of foods, including other insects and sweets. When acrobat ants nest indoors they are usually inside wood or cavities kept moist with water from leaks. They may also nest in foam insulating board or sheathing. As they excavate the large galleries used as nest sites, sawdust may be deposited near the nest area.

Tapinoma sessile is a species of ant that goes by the common names odorous house ant and coconut ant. This species is a scavenger-predator ant that will eat most household foods, especially those that contain sugar, and other insects. Indoors they will colonize near heat sources or in insulation. In hot and dry situations, nests have been found in house plants and even in the lids of toilets. Outdoors they tend to colonize under rocks and exposed soil. They appear, however, to form colonies virtually anywhere, in a variety of conditions.

Odorous house ants can trail extensive distances, usually along landscape edges, though their trails are rarely longer than 50 feet. Colonies range in size from 100 to 10,000, and house several queens, as many as 200 in some instances. Odorous house ants are non-aggressive. While queens can lay as many as 20 to 30 eggs in a single day, they lay only 1 to 2 eggs, or less,  per day on average over long periods of time. A typical time to devvelop into the adult phase is 34-38 days for these ants. It is believed that queens and male ants are only produced in larger colonies.

The pharaoh ant (Monomorium pharaonis) is a small 2 mm, yellow or light brown, almost transparent,  ant notorious for being a major indoor nuisance pest, especially in hospitals. The origin of this “tramp” ant is uncertain, although favoured alternatives include West Africa and Indonesia. The Pharaoh ant has been introduced to virtually every area of the world including Europe, the Americas, Australasia and Southeast Asia. Pharaoh ants are a tropical species, but they thrive in buildings anywhere, even in temperate regions where central heating is present.

Pharaoh ants use a positive feedback system of foraging. Each morning, scouts will search for food. When one finds it, it will instantly return to the nest. This causes several ants to follow the successful scout’s trail back to the food source. Soon, a large group will be upon the food. Scouts are thought to use both chemical and visual cues to remain aware of the nest location and find their way.[14] If the colony is exploring a new region, they employ a land rush tactic, in which a large number of foragers randomly search, constantly releasing pheromones.

Carpenter ants are large 1.25 to 1 inch ants indigenous to many parts of the world. They prefer dead, damp wood in which to build nests. Sometimes carpenter ants will hollow out sections of trees. The most likely species to be infesting a house in the United States is the Black carpenter ant (Camponotus pennsylvanicus). However, there are over a thousand other species in the genus Camponotus.

Carpenter ant species reside both outdoors and indoors in moist, decaying or hollow wood. They cut “galleries” into the wood grain to provide passageways for movement from section to section of the nest. Certain parts of a house, such as around and under windows, roof eaves, decks and porches, are more likely to be infested by carpenter ants because these areas are most vulnerable to moisture. Carpenter ants have been known to construct extensive underground tunneling systems. These systems often lead to and end at some food source – often aphid colonies, where the ants extract and feed on honeydew. These tunneling systems also often exist in trees.

The yellow crazy ant (Anoplolepis gracilipes) is a species of ant, introduced accidentally to northern Australia and Christmas Island in the Indian Ocean, and is a pest in both locations. They are colloquially called “crazy” because of their erratic movements when disturbed, and are one of the largest invasive ants species in the world.

Along with the red imported fire ant (Solenopsis invicta), the big-headed ant (Pheidole megacephala), the little fire ant (Wasmannia auropunctata), and the Argentine ant (Linepithema humile), the yellow crazy ant is one of the five species of tramp ants, known for invasive behavior and devastating ecological effects. Also known as the long-legged or Maldive ant, it has also been listed among the 100 most devastating invaders of the world. It has invaded ecosystems from Hawaii to Seychelles, and formed supercolonies on Christmas Island in the Indian Ocean.