Check out some of the unique characteristics of common pest in our area. 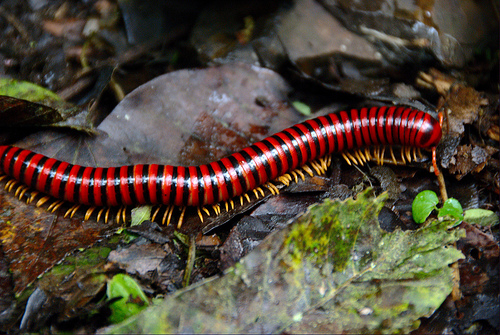 Centipedes, from Latin prefix “centi” meaning hundred and “pes” or “pedis” meaning foot,  are arthropods belonging to the class Chilopoda and the Subphylum Myriapoda. They are elongated metameric animals with one pair of legs per body segment. Despite the name, centipedes can have a varying number of legs from under 20 to over 300. All centipedes, discounting individual mutants, always have an odd number of pairs of legs.  A key trait uniting this group is a pair of venom claws or forcipules formed from a modified first appendage. This also means that centipedes are an exclusively predatory taxon, which is uncommon.

Centipedes normally have a drab coloration combining shades of brown and red. Cavernicolous (cave-dwelling) and subterranean species may lack pigmentation and many tropical scolopendromorphs have bright aposematic colours. Size can range from a few millimetres in the smaller lithobiomorphs and geophilomorphs to about 30 cm (12 in) in the largest scolopendromorphs. Centipedes can be found in a wide variety of environments.

Millipedes are arthropods that have two pairs of legs per segment, except for the first segment behind the head which does not have any appendages at all, and the next few which only have one pair of legs. Each segment that has two pairs of legs is a result of two single segments fused together as one. Most millipedes have very elongated cylindrical bodies, although some are flattened dorso-ventrally, while pill millipedes are shorter and can roll into a ball, like a pillbug.

Most millipedes are detritivores and feed on decomposing vegetation, faeces, or organic matter mixed with soil. Millipedes in the order Polyxenida graze algae from bark, and Platydesmida feed on fungi. A few species are omnivorous or occasionally carnivorous, feeding on insects, centipedes, earthworms, or snails. Some species have piercing mouth parts that allow them to feed on plant juices.