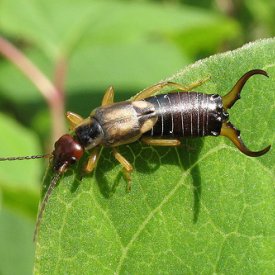 Earwigs, sometimes called pincerbugs, make up the insect order Dermaptera. The order is relatively small among other insect orders, with only 1,800 recorded species in 12 families, found throughout the Americas, Eurasia and Australia. Typical earwigs have characteristic cerci, a pair of forceps-like pincers on their abdomen, and membranous wings folded underneath short forewings, hence the literal translation of the scientific name for order “skin wings”. Some groups within the earwig order are tiny parasites on mammals and lack the typical pincers. Earwigs can fly, but rarely do so.

Earwigs are hemimetabolous, meaning they undergo incomplete metamorphosis, developing through a series of 4 to 6 molts. The developmental stages between molts are called instars. Earwigs live for about a year from hatching. They start mating in the autumn, and can be found together in the autumn and winter. The male and female will live in a chamber in debris, crevices, or soil 2.5 mm deep. After mating, the sperm may remain in the female for months before the eggs are fertilized. From midwinter to early spring, the male will leave, or be driven out by the female. Afterward the female will begin to lay 20 to 80 pearly white eggs in 2 days.