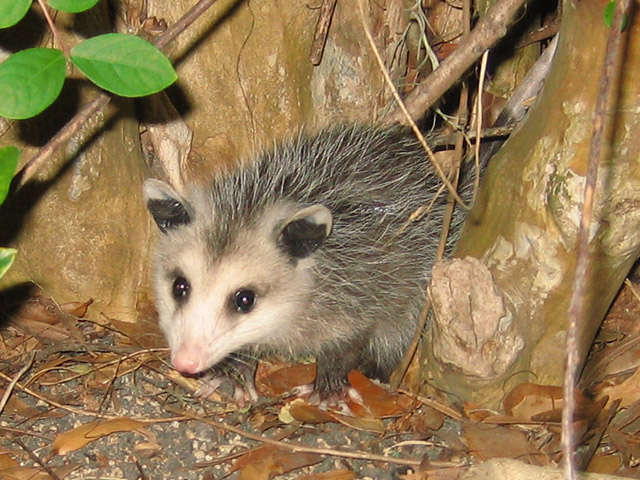 Didelphimorphia is the order of common opossums of the Western Hemisphere. They are commonly also called possums, though that term is also applied to Australian fauna of the suborder Phalangeriformes. The Virginia Opossum is the original animal named opossum. The word comes from Algonquian wapathemwa meaning “white dog”. Opossums probably diverged from the basic South American marsupials in the late Cretaceous or early Paleocene. A sister group is Paucituberculata (shrew opossums). Opossums are small to medium-sized marsupials, with the largest just exceeding the size of a large house cat, and the smallest the size of a mouse.

Opossums are usually solitary and nomadic, staying in one area as long as food and water are easily available. Some families will group together in ready-made burrows or even under houses. Though they will temporarily occupy abandoned burrows, they do not dig or put much effort into building their own. As nocturnal animals, they favor dark, secure areas. These areas may be below ground or above. When threatened or harmed, they will “play possum”, mimicking the appearance and smell of a sick or dead animal. When playing possum, the lips are drawn back, teeth are bared, saliva foams around the mouth, and a foul-smelling fluid is secreted from the anal glands. Their stiff, curled form can be prodded, turned over, and even carried away. The animal will regain consciousness after a period of minutes or hours and escape.