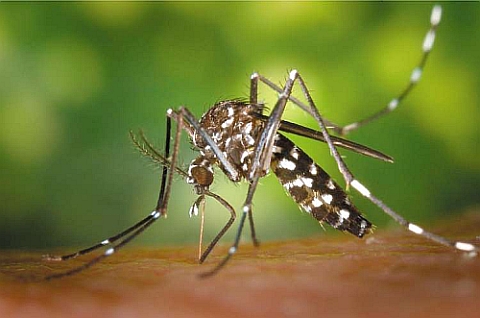 The Asian Tiger Mosquito or Forest Day Mosquito (Aedes Stegomyia albopictus), from the mosquito family Culicidae, is characterized by its black and white striped legs, and small black and white body. It is native to the tropical and subtropical areas of Southeast Asia. However, in the past couple of decades, this species has invaded many countries throughout the world through the transport of goods and increasing international travel.

This mosquito has become a significant pest in many communities because it closely associates with humans, rather than living in wetlands, and typically flies and feeds in the daytime in addition to at dusk and dawn.

Although Aedes albopictus is native to tropical and subtropical regions, they are successfully adapting themselves to cooler regions. In the warm and humid tropical regions, they are active the entire year long; however, in temperate regions they hibernate over winter. Eggs from strains in the temperate zones are more tolerant to the cold than ones from warmer regions. They can even tolerate snow and temperatures under freezing. In addition, adult tiger mosquitoes can survive throughout winter in suitable microhabitats.