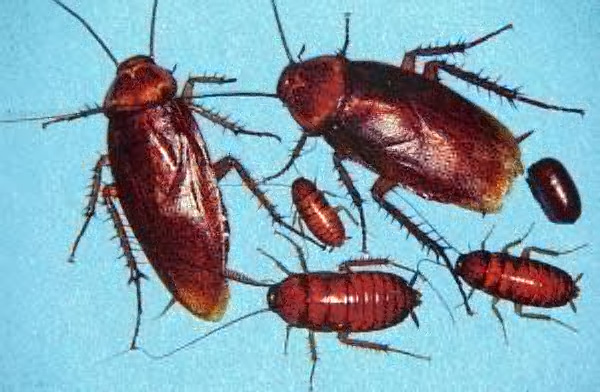 The German cockroach Croton bug or Steam fly (Blattella germanica) is a small species of cockroach.  It measures about 1.3 cm (0.51 in) to 1.6 cm (0.63 in) long, but they are known to get bigger. It can be from tan to brown to almost black, and has two dark parallel streaks running from the head to the base of the wings. Although it has wings, it is unable to sustain flight. The German cockroach is one of the most common and prominent household cockroaches in the world, and can be found throughout many human settlements. These insects are particularly fond of inhabiting restaurants, food processing facilities, hotels, and nursing homes.

In colder climates, they are found only near human habitats, since they are not very tolerant to cold. However German cockroaches have been found as far north as Alert, Nunavut. It is originally from Asia, and is closely related to the Asian cockroach. To the casual observer the German and Asian cockroach appear nearly identical and may be mistaken for the other. The German cockroach can be seen in the day occasionally, especially if there is a large population or if they have been disturbed. However, sightings are most commonly reported in the evening hours as they are most active at night.

Human activity has extended the insect’s range of habitation. Specimens have been observed in eastern North American cities as far north as New York City, Toronto, and Montreal, though its intolerance to cold restricts it to human habitations. Global shipping has transplanted the insects to world ports including Tenerife (Spain), Southern Spain, Greece, Taiwan,  Cape Town and Durban, South Africa. The insect is believed to have originated in Africa, but had become established in the southern U.S. by the time that it was given its name.

The brown-banded cockroach (Supella longipalpa) is a small species of cockroach, measuring about 5/8 in. (10 to 14 mm) long. It is tan to light brown and has two light-colored bands across the wings and abdomen.  The wings may sometimes appear to be broken or irregular, but are quite noticeable. The bands may be partly obscured by the wings. The male has wings that cover the abdomen, while the female has wings that do not cover the abdomen completely. The male appears more slender than the female, and the female appears wider.

The brown-banded cockroach has a fairly wide distribution, being found in the northeastern, southern, and midwest regions of the United States quite commonly. The brown-banded cockroach is one of the most recent alien cockroaches to form breeding colonies in Britain and Ireland. They need less moisture than the German cockroach so they tend to be more broadly distributed in the home, such as in living rooms and bedrooms. They can often be found in homes and apartments, but are less common in restaurants. The brown-banded tend not to be found in the daytime, since they avoid light. This cockroach eats a wide variety of items and are usually scavengers.  They can eat often almost anything organic, including decaying matter. Brown-banded cockroaches have been known to cause problems in hospitals by emerging at night to feed on bodily fluids, thereby risking cross-infection.

The oriental cockroach (Blatta orientalis), also known is waterbug,  is a large species of cockroach that measures about 1 in. (2.5 cm) in length at maturity. It is dark brown to black in color and has a glossy body. The female Oriental cockroach has a somewhat different appearance to the male, appearing to be wingless at casual glance but has two very short, useless wings just below its head and has a wider body than the male. The male has long, brown wings, which cover a majority of its body, which is more narrow. The odd male is capable of very short flights, ranging from 2 to 3 meters. The female oriental cockroach looks somewhat similar to the Florida woods cockroach and may be mistaken for it.

The oriental cockroach tends to travel somewhat more slowly than other species. They are often called “waterbugs” since they prefer dark, moist places. They can often be found around decaying organic matter, and in sewers, drains, damp basements, porches, and other damp locations. They can be found outside in bushes, under leaf groundcover, under mulch, and around other damp places outdoors. They are major household pests in parts of the northwest, mid-west, and southern United States.